About half of my time in the garage today was spent deburring the left flap skins and dimpling anything I could reach with my squeezer. However, I got stuck on about 4 holes on the top skin. I can’t find any way to dimple the aft-most holes because the bend in the skin is so tight that nothing I have can get in their. So, as I thought about what to do, I moved on to other items including priming the FL-706A & B (these will be the only flap parts that get primed) and installing the ailerons on the wings.

On the ailerons, I decided to start by installing the bellcranks even though I don’t have any of the push tubes completed. To install these, I had to remove both bellcrank brackets and re-drill them to 1/4″. Apparently, the drill bit I used originally was slightly undersized and the AN4 bolt wouldn’t go through. I was going to have to remove at least the top bracket anyway, so removing both wasn’t such a big deal.

After re-drilling the brackets, I reinstalled the lower bracket, then slid the bellcrank bolt through the top bracket, bellcrank bushing, bellcrank and lower bracket. Before installing the bushing, I lubricated it with some Aeroshell 33. Van’s just says to use your preferred grease. Since I don’t have one, I decided on Aeroshell 33 since it advertises itself as and all-purpose airframe lubricant. 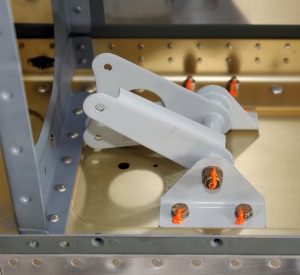 The aileron bellcranks were easy, but time-consuming to install since parts of the bracket have to be removed to insert the long bolt.

Next, I installed the ailerons on the wings. First, I had to make a spacer for the lower end of the inboard aileron bracket. This spacer was just a piece of tubing stock cut to the appropriate length. Actual installation of the ailerons was simple, but sliding all the washers into place is a bit of a pain. It was nice to see the ailerons in place. For some reason, they make the wings look more like wings! 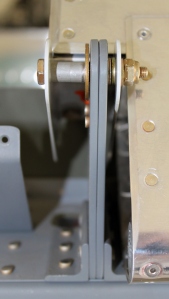 The ailerons are attached to the inboard bracket using a spacer and several washers.

The aileron is attached to the outboard bracket using several washers and there isn't much room to work. 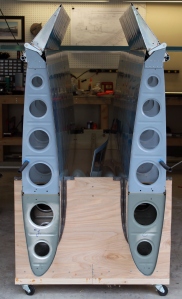 The outboard end of the wings with the ailerons installed. 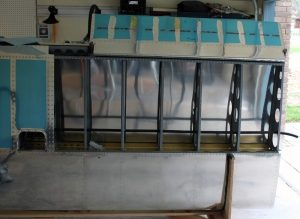 Another view of the aileron on the right wing.

AEROSHELL Grease 33 is our newest generation multi-purpose synthetic grease. It is specifically designed to lubricate a wide range of applications and operating conditions on commercial aircraft. It is approved for Boeing’s BMS 3-33 specification and it covers the operating temperature range between –73 °C and +121 °C.

Warning: Unknown: Failed to write session data (files). Please verify that the current setting of session.save_path is correct (/var/cpanel/php/sessions/ea-php54) in Unknown on line 0