What Are They And How Do They Differ?

Greases are lubricants which have a semi-liquid to solid consistency. They are not simply very viscous oils but are actually oils mixed with other ingredients to give a gel like consistency.

When they are used as lubricants, greases behave like oils in many ways. They reduce friction by providing a film which separates moving surfaces and, as we will see later on, it is actually oil that carries out this lubrication rather than the grease itself. However, unlike oils, greases have the advantage that they tend to stay where they are put. They are less likely than oils to leak out of a machine and less likely to flow away from the surface that they lubricate under the effect of gravity or centrifugal forces. At the same time, and this can be significant in many airframe applications, greases can form an effective seal against moisture and solid contaminants.

These properties mean that greases can often act as effective and economical lubricants, especially in mechanisms which are hard to reach or require infrequent lubrication.

So how is a grease made?

All greases consist basically of a base oil, a thickener (essentially a lattice which gives the stable semi solid consistency) and performance improving additives. Varying these three basic ingredients leads to different greases suitable for a vast range of applications. However, in broad terms, a typical grease would consist of about 80% - 90% base oil, 10% - 15% thickener and about 5% - 10% additives.

Choosing a base oil for a grease is essentially determined by the type of application the grease will be used for. For example, with mineral oil based greases, if the application involves heavy load conditions a heavy viscosity base oil will be used (for example in AeroShell Grease 33 which is commonly used in General Aviation as an undercarriage wheel bearing grease).

However, high viscosity mineral oils do not perform well at low temperature as they become too thick, and so for more general use a lighter base oil will be used. This is the case with the general purpose AeroShell Grease 6 which has an operating temperature range of -40/+121 Deg C compared with -20/+177 Deg C for AeroShell Grease 5. As you will appreciate, there are few airframe applications which exceed the 121 Deg C limit of AeroShell Grease 6, but wheel bearings using AeroShell Grease 5 will sometimes be exposed to high temperatures with high rolling friction and hard braking which takes into account the 177 Deg C upper limit for this grade.

Greases which are required to operate over a very wide temperature range are often base on synthetic oils, often derived from esters rather then mineral oils. However, these oils are more aggressive to seal materials and should not be used unless specified for your aircraft. An example of a grease with a synthetic base oil is another multipurpose grease, AeroShell Grease 7, which is used extensively on commercial aircraft where there is frequent exposure to extremely low temperatures at altitude. AeroShell Grease 7 has an operating temperature range of -73/+149 Deg C. 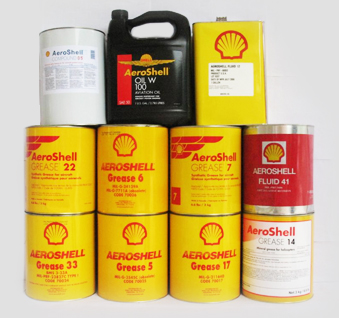 The amount and type of thickening agent used in making a grease has the biggest effect on its consistency, that is its softness or stiffness. The thickener does not perform any lubrication - that is the job of the oil - but it does hold the oil in a lattice rather like a sponge. Again like a sponge, when pressure or stress is applied, oil is released which then lubricates the mechanism and, when the stress is released, the thickener and oil return to a semi-solid state.

The consistency of greases can vary from very soft, semi-fluid cream like consistencies through to hard wax-like solids. The consistency is measured by allowing a standard metal cone to sink into the grease and measuring its penetration. This is often called the Unworked Penetration value of the grease.

Most greases tend to soften slightly when heavily worked and the ability of the grease to resist changes in consistency during working is an important characteristic, particularly if vibration is present. This "Working Stability" is quantified by working the grease with perforated mechanical plunger and measuring it penetration value afterwards, the result often being referred to as the "Worked Penetration" value of the grease. The difference between the worked and unworked penetration values gives an indication of the working stability of the grease.

The majority of aviation greases have unworked penetration values of around 260-320 which is the normal consistency suitable for roller bearings, but also can be suited to fretting and sliding type applications as demonstrated by AeroShell Grease 14, the leading multi purpose Helicopter grease.

The common types of thickeners are generally "soap" based or "clay" based. A soap is a salt formed when a metal hydroxide, or alkali, is reacted with a fatty acid; a kind of organic acid derived from fats. The first greases were made with Calcium and Sodium soaps but Lithium soaps, and less commonly Aluminium and Barium soaps, are now also being used.

Calcium soaps have a smooth texture and have good water resistance, but have very low operating temperatures normally not more that 60 Deg C. This can be improved by reacting the Calcium soap with organic acids to form a Calcium Complex thickener. It is a Calcium Complex thickener that is used in the helicopter grease AeroShell Grease 14 which has a temperature range of -54/+93 Deg C.

Sodium soaps have a higher melting point than plain Calcium soaps, have a fibrous texture and have good adhesive properties. However, they have relatively poor water resistance and risk suffering water washout in very wet conditions.

Lithium soaps have a butter like texture, relatively high temperature (up to about 135 oC) and have good water resistance.

However all of the soap thickeners are limited by their high temperature performance as the thickeners tend to melt and the grease softens markedly.

Most of the AeroShell range of greases therefore use a patented thickener known as Microgel. This is a specially treated clay based thickener which has:

AEROSHELL Grease 33 is our newest generation multi-purpose synthetic grease. It is specifically designed to lubricate a wide range of applications and operating conditions on commercial aircraft. It is approved for Boeing’s BMS 3-33 specification and it covers the operating temperature range between –73 °C and +121 °C.

Warning: Unknown: Failed to write session data (files). Please verify that the current setting of session.save_path is correct (/var/cpanel/php/sessions/ea-php54) in Unknown on line 0